Tony and Aurelie run Hop to the Beat Dance Studio full time, teaching and hosting dances and events. They met as beginner dancers in Boston in 1990 and first experienced Lindy Hop in 1992. Once hooked, they were traveling both nationally and abroad to take classes with the top international Lindy Hoppers. In 1993 they began to bring some of these world class instructors to New England, which eventually led to the International Lindy Hop Workshop Series, holding two to three weekend workshops each year.

Their first Lindy Hop classes began in 1994 in Providence, RI and continued for two years. In 1995, wanting to share their passion with others, Tony and Aurelie established Hop to the Beat Dance Studio and began teaching in the Boston area, offering a full range of Lindy Hop classes to their local community. In 1997, along with Ivan and Elisabet Berggren of Sweden, they held their first annual Beantown Lindy Hop Camp, the first week long dance camp in the U.S. devoted to Lindy Hop, which has become a major international event.

Tony and Aurelie played a major role in establishing the growing Lindy Hop community in New England. They have taught ongoing classes in Mystic and Hartford, CT, Amherst, MA and at several local universities and high schools. They have been instructors at Augusta Camp’s Blues and Swing Week in West Virginia and at Ryan and Jenny’s Camp Savoy in England. Other workshops and dance weekends throughout the East Coast from Maine to Florida include the American Lindy Hop Championships, North Atlantic Dance Championships, Virginia State Open Swing Championships, Swing Fling, New Year’s Weekend Dance Extravaganza, The Boston Tea Party, Frankie Mania! in Florida and the FAC Oktoberfest in Vermont. Aurelie has also had the incredible pleasure of assisting in weekend workshops with some of the world’s best, including Steven Mitchell, Warren Heyes of the Jiving Lindy Hoppers, Eddie Janssen of the Rhythm Hot Shots and the legendary King of Swing, Frankie Manning. In addition, Tony and Aurelie are the Competition Coordinators for the International Lindy Hop Championships in Washington, DC and Tony has emceed for the World Lindy Hop Championships, Swing Fling, as well as Beantown.

While performing with The Kamikaze Jitterbugs, Tony and Aurelie toured in Asia with the Artie Shaw Orchestra and appeared with the Boston Pops Orchestra in the nationally-televised 4th of July Esplanade Concert. At the 1994 American Swing Dance Championships they were members of the winning team, the Transatlantic Lindy Hoppers. They have been featured twice in Chronicle, a Massachusetts based TV program, have made numerous cable TV appearances, and were the instructors for the Friday Swing Night at the Roxy in Boston during its one year run, one of the largest Swing venues in the country.

Shows in which they have appeared include Ryan & Jenny’s Camp Savoy Cabaret in Guildford, England, DanceTime’s Winter Xtravaganza at Bedford High School in Bedford, Elvis-Loving You at the Dance Complex in Cambridge, Tap Dance By Design, A Musical Revue at The Garden Arts Center in New London, CT, and Stage Door Canteen 1940’s USO Show at the IBEW Hall in Waltham.

I’d like to thank you both for all the efforts you’ve made to bring some rhythm to our lives. Lindy is the best and you are the best at bringing it to us. Looking forward to all the fun in the coming year.

I’d like to thank you for the great teaching and the unforgettable Beantown Camp. In my top five of best memories, three are related to Lindy Hop. Thanks for being my first Lindy Hop teachers and I hope to see you some time next year during one of my visits to Boston! 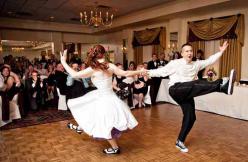 I am still so grateful for the lessons we had with you - you and Tony truly gave us the first dance we dreamed up, and that we (and our guests!) won’t soon forget! Thank you again and looking forward to seeing you soon! 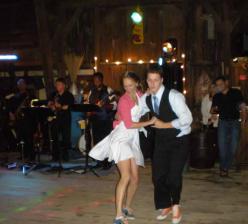 A year ago, we were a young couple in (desperate) need of dance lessons for our wedding. Lucky for us, we happened on one of the monthly Uptown Swing events in Brookline, discovered Tony & Aurelie, and now we can’t get enough!

Tony & Aurelie are knowledgeable, fun teachers that deliver well-balanced lessons—always adding new moves to the mix, covering (necessary) technique, and giving personal feedback. Lindy is so much fun and we continue to have a blast learning it together (even after the wedding). We have Tony & Aurelie to thank for our new found addiction that will certainly keep us dancing (and laughing) together for years to come.

Aurelie & Tony are such wonderful Lindy Hop teachers.  I absolutely love their classes.  Their fantastic dedication in nurturing their students and in providing a terrific strong supportive Lindy and swing community is a total inspiration.  Uptown Swing—their dynamite monthly dance in Brookline, is not to be missed!  Their most incredibly phenomenal premier Beantown Lindy Hop Camp for the worldwide Lindy community is truly absolutely amazing beyond words.

So you are great dance instructors and are solely responsible for all the fun I’ve had dancing over the last 8 years, as I got better and better, so thank you for all that.

…just want to thank you for being such wonderful teachers, delightful people, and powerful advocates and supporters of the Swing dance community! It has been terrific participating in your classes; I learned so very much and enjoyed myself all the way.

Just to thank you (Tony) and Aurelie for your wonderful dance instruction…I really appreciated the teaching methods that you and Aurelie used. You broke everything down and allowed us plenty of opportunity to practice (again and again) the moves we’d just learned. Also, you were so very positive and encouraging–not to mention generous with the time you spent with me/us individually! AND, you were great not only at identifying my areas of “weakness”, but at giving very specific and concrete suggestions on how to address whatever it was that was going wrong. Incredibly helpful!